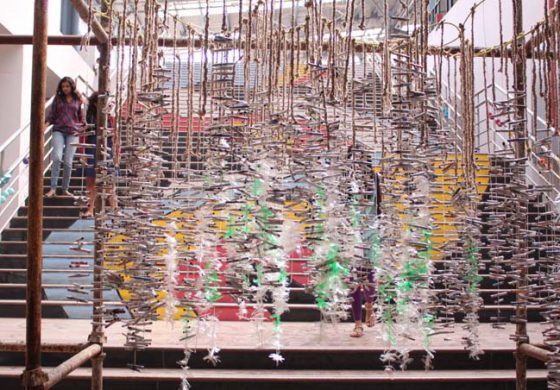 There has been a growing awareness that in many domains of design and the human sciences—geography, politics, ethics, the visual, the social—not only the conceptualizations of the domains but our practical, passionate doings in the domains are distorted and cramped by the dominant frames received either through the colonial past or contemporary disciplinary lenses. The distortions are all the more acutely felt in domains where there were alternative frames, where the very structuring of the lived domain was different. We see the effect of such distortions in our social world where the fine-grained practices that sustained the social and ethical world have been distorted and rendered invisible by disciplines that had no resources to understand them.

But such dissonances are common whether we take eco-cultural spheres, the built environment, political and educational institutions.  In domains as far apart as geography and ethics, but also in many other domains we encounter a problem that is both cognitive and practical. How to understand this dissonance in different domains and to practically and creatively deal with it is a question that we can no longer evade. Implicitly or explicitly the models have come from elsewhere (colonial inheritance in the case of education, politics and administration, but more generally western frames in other domains) and the implicit frame has had to assert itself obliquely, often only in the way we have had to cope with the inhospitable structures. The result often enough has been distortion, of both the imposed structures and the resistance. The task is to understand both the distortions and the superimpositions that have rendered invisible different ways of conceptualizing the domains, which may be geographical, ethical or aesthetic.

We present here the beginnings of such an attempt both from the humanities and design.  Using the maidan as a resource and an opening for investigating how the city can be reimagined and with it how a cluster of concepts and distinctions—rural/urban– that constrain our imagination of the city can be overturned, Dilip da Cuhna and Anuradha Mathur outline a veritable manifesto of design inquiry: “This is design beyond the facts and critique of empirical and critical research; it is design as imaginative inquiry. It assumes that people do not just see things differently; they see different things.” The conception of design inquiry that they set out here is in some sense a distillation of the learning they have extracted from their ground breaking design work on water and the rigorous and inventive studios they have been conducting design work, both in the US and in India.

There is little doubt that in their design projects and their writing, they have been demonstrating the richness of design conceived as an expression of practical knowledge. There is then a dialogue between their conception of design as imaginative inquiry and Dhareshwar’s conception a practional matrix with which he proposes to reconceptualize the practical form of life underlying Indian sociality. In order to begin such a reconceptualization, he suggests that we will have to choose between the past and history, between adhyatma and philosophy, between tradition and religion, and finally between the caste-system and the practional matrix.  Those of us familiar with da Cuhna and Mathur’s audacious attempt to oppose the imagination of rain-terrain to the river-thinking that has wrought such damage in India and elsewhere will have no difficulty in seeing the resonances of these oppositions and the new ground of convergent inquiries they open up, not only making possible the seeing of different things but of acting differently too, both holding out the possibility of creating new practitional matrices.

Ashwin Kumar’s essay too engages in the task not of rethinking nationalism but of asking why the frame of nationalism has imposed itself in India even when there has always been a strong intuition that it is neither home-grown nor really compatible with the practical form of life. What does one make of that intuition? How explore its presence or articulation when the discourse of the human sciences cannot break with the template of nationalism?  Rather than simply dismiss the “phenomenon” or undertake one more futile deconstruction of its discourse, Ashwin Kumar engages in the far more difficult task of unearthing the question or the ground on which the discourse has become parasitic and has in the process distorted that ground. Is it possible to re-articulate that ground? Can we see “different things” there?

We are initiating this dialogue between the humanities and design at a time when the university itself is in crisis. There has hardly been any serious attempt to understand the crisis through a philosophical interrogation of the conception of education which shaped our idea of the university. Shashikala Srinivasan’s essay on the impasse of liberal education in India seeks to outline a framework for such an interrogation.  Using the American debate on the role of humanities in higher education, Srinivasan’s essay seeks to understand the possible reasons for the conception of liberal education not taking root in India.

Finally, the conversation with Geetha Narayanan, the founder-director of Srishti School of Art, Design and Technology, addresses the critical issue of the fate education in the neo-liberal age. As an educator and institution builder Narayanan articulates a compelling vision of how design and humanities need to develop a new pedagogy through mutual critique. Anticipating the disintegration of the neo-liberal memes that have taken hold of all domains, including education, she is cautiously optimistic about what this new pedagogy can achieve by creatively drawing on what India “knows.”

The crisis in which higher education finds itself in India is a good, if rather grave, example of the kind of issues that design and the humanities need to actively collaborate in order respond creatively and imaginatively. If the humanities is burdened by its own historical and philosophical baggage that prevents it from seeing new questions, or that makes it fall back on old answers that have proved to be inadequate, design often brings the brash energy that may well be thinly disguised market-speak, blithely holding out solutions that ignore the depth of the questions.  To bring the new ground into being, we will have to interrogate the bounds of inherited disciplinary imaginations, whether humanities or art and design.  The essays that follow make a concerted attempt to visualize and articulate the new ground.