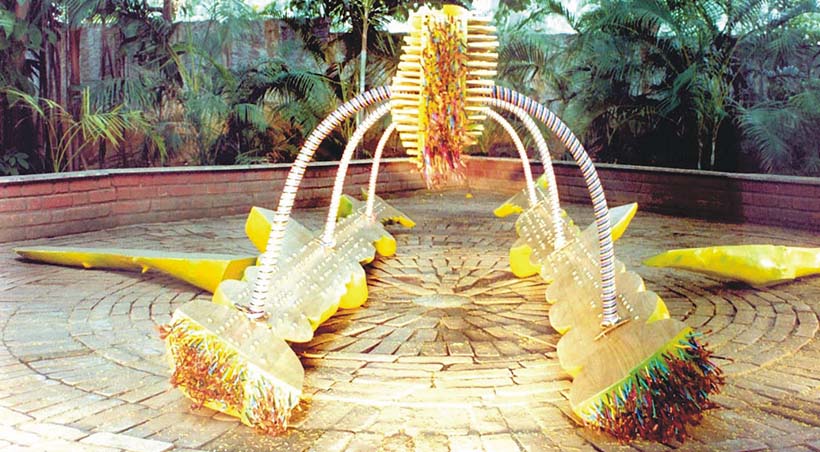 Artists are labourers who toil for their ideas

In the morning slot on the second day of the ART Marathon, in the middle of the gallery on a green drop cloth, stood a 30-year-old bicycle.  When the bell rang announcing the start of the show, the artist Suresh Kumar G entered, in the sartorial garb of a mechanic—open half sleeved shirt over a full sleeves shirt—with tools in hand: wrench, screwdriver, hammer and pliers. Suresh’s performance for the next 45 minutes consisted of dismantling the old bicycle, which he inherited from his father, while narrating the story of the cycle.  On the surface it appears as a mundane and inconsequential act, but at a deeper level it connects differentiated temporalities—artists own past and the current events surrounding Venkatappa Art Gallery—conceptually and in actuality.

A three-day ART Marathon from May 9 to 11, 2016 was organized by the Venkatappa Art Gallery Forum, a platform of artists protesting the Karnataka State Government’s decision to handover the only public art gallery in the state to a private collector.  The ART Marathon began at 11 in the mornings and ended at 7 in the evenings.  Each day was divided into 9 slots; each slot showcased 4 to 5 artists, including a live performance or action; and a video or sound artist.   In total, during the three days of ART Marathon, over 120 artists showed their works in the gallery.  These collectively curated art displays and performances, that would change every 45 minutes, generated energy, vibrancy and dynamism previously unseen in an art event. More subtle and creative than AgitProp, the ART Marathon was not only a novel display technique, but was also about artists coming together as agitators for collective action, deploying instruments of practice at their disposal: space and art.

The performance of dismantling the bicycle became a site of overlapping temporalities and histories. The bicycle that was disassembled during Suresh’s performance is the core through and around which his memories about his father, childhood and student days are woven together.  His father, as an employee of the Aeronautical Development Establishment (ADE) in Bangalore, used to travel to work and back home on this bicycle.  As a child Suresh memorised the parts of the bicycle from an English manual that came with it.  He washed it and cleaned it everyday. As a student of sculpture at Chitra Kala Parishad (CKP), a publicly funded art school in Bangalore, and later in Ahmedabad as an artist-in-residence, Suresh used the same bicycle to transport discarded pieces of wood picked up from construction sites to be carved into works of art, deeply embedded in his personal experiences.  The bicycle symbolism extends beyond the biographical.  Culturally, as narrated by well-known Kannada writer Kuvempu in his novel Malegalali Madumagalu (1967), the bicycle was an object of wonder and a harbinger of modernity, of self-mobility and speed when it was brought first by the British to the Western Ghats.  As the narrator observes in the novel, the bicycle had greater impact on people than the figure of Christ.

Devayya rushed home with a servant as there was no sign of bicycle carrying Bachha appearing even after a long wait. He beholds: Bachha, as though a devotee before a goddess, absorbed in watching the machine from a distance!  Scolding “Hey dumb-bitch, what are you gaping at?” Devayya Gowda got the servant to help Bachha carry it to the field. The field as a  field  panted as everyone watched the two servants carrying the bicycle behind Devayya Gowda. Acclamatory, astonished, disappointed, contemptuous—whole variety of utterances began to be whispered.

“What kind of bisekal this? Shining bright, bright, no?”

“Ayyo, bisekal has two halves. This looks like it has two wheels!”

“Eeeh not bisekal! This is supposed to be bicycle!

“Look, look, they are bringing it down…did you see? How he is holding it now!…”

“No, instead of the wheels being side-by-side like in a cart, this has wheels one behind the other, how will this move? If you climb, how will

you stand? It will topple to the side, you watch!”

“It’s a bell that you ring to clear the way dude!”

“You mean, if you keep doing trin trin, the way keeps clearing by itself? …

“There! There! The padre has climbed!”

Triumphant sound emerged as though to echo the surrounding forest as astonishment, delight, excitement swelled. Removing the coat and headgear, strapping the panche around the crotch tightly, without removing the boots, Jeevarathnayya rode the bicycle for a couple of rounds on the rough uneven ground itself and disembarked from the bicycle. The crowd that was pushing around the edges of the forest surrounding the field began to surge from all four directions toward the padre who was holding the bicycle. In that hustle-bustle as the discriminating sense of who is touchable and who is untouchable seemed to get suspended, the padre’s professional mind spoke to itself: the bicycle is far more influential in preaching than Jesus Christ and the Bible

Translated from Kannada by Vivek Dhareshwar with inputs from Keshava Malagi

While the bicycle is the cathexis invested with memories , it’s dismantling in a performative event is not only unravelling of the memories, but also creates a metaphor for the fate intended for Venkatappa Gallery, the very space in which this performance took place.  Like the bicycle—a humble man’s vehicle and a symbol of the ordinary—Venkatappa Gallery in the heart of Bangalore too is an inexpensive and unpretentious space accessible to all artists to showcase their work.  Under the market fundamentalism of neoliberal ideology, the only State supported art gallery and public space was to be handed over to a private art dealer and a gallery owner. The fate proposed for the gallery under the idea of improvement and enhancement was to turn it into a building with a glass façade. The glass façade so characteristic of neoliberal architecture and urbanism across India is starkly visible in the buildings across the street from the gallery and they literally embody this disjunction in Indian reality.  Two modernities—the nationalist and the neoliberal—stand face-to-face with the street, the no-man’s land, as a divider.  The agenda of the government and the art dealer was to turn this gallery into a place for showing the private collection of the wealthy, and thereby, appropriating the public space for private good.  The three month long agitation by artists from all over the state of Karnataka with innovative forms of protest resulted in the temporary retreat of the government and the private foundation.

Suresh’s performance is significant conceptually and artistically because in the very act of disassembling the bicycle as an object of personal memory, it is metamorphosed into a metaphor for public events.  On the one hand the performance destroys the material support – the bicycle with personal history preserved for over 30 years – for memory, and in the process transforms the memory into a living reality.  On the other hand, in the process of dismantling a material object, an idea is constructed: bicycle and its disintegration as a metaphor for events surrounding the Venkatappa Gallery.  According to Spanish philosopher José Ortega y Gasset, metaphor enables us to apprehend that which is at the limits of our comprehension because it serves to connect that which is remote and unknown with something that is familiar and closer (Ortega y Gasset 1963, 391).  In this making of a metaphor, Suresh’s performance brings to recognizable ground the true significance of Venkatappa Art Gallery as a public space and the hidden design behind its adoption plan.

The bicycle as a symbol of speed and a symbol of mobility before the introduction of the automobile as narrated by the writer Kuvempu in his novel, happens to be true in the case of Suresh’s grandfather, who by acquiring a bicycle (a gift from one of the clients) expanded his mother’s small milk business. The grandfather used to carry on his bicycle two large cans of milk collected from farmers in nearby villages in the outskirts of the city, every morning, and bring it to Bangalore to sell.  This was a time before the modern Nandini dairy with European cows was introduced in the city (Holstein cow is still a part of Nandini Dairy’s logo).  As a child, Suresh accompanied his grandfather sometimes on his milk rounds passing in front of the modern dairy with cement cows, which the milkmen from village looked on with admiration, but at the same time cautiously avoided it since Nandini Dairy with its cement sculptures of cows in all hues and colours, and strangely dressed villager statues, stood there as a harbinger of the consequences of modernity to villagers.  Unlike the bicycle, an alien object that fascinated the villagers when they first saw it in Kuvmepu’s novel, the familiar and common cows in cement were ominous.  The sculptures animated the narrative themes of India’s first modernity: city and village, agriculture and industry, old and the new working in harmony to build a new India.

Cow sculptures in front of Nandini Dairy undergoing facelift in 2016. Courtesy of the artist.

These early experience, as it would happen on many occasions for Suresh, became a rich source for artistic creations and interventions.

In thirty-five years since he first saw the sculpture in front of the modern dairy, Bangalore city has changed.  It is in the throes of a second wave of modernity—the neo-modernity—being erected on the ruins of the first.  The narratives of neo-modernity value, to the exclusion of all other things, market fundamentalism—free market as a solution to all problems—selling, decorously called “entrepreneurship” as virtue, and technology as “ideology”.   Suresh’s work throughout his artistic career deconstructs the narrative topics of both, India’s first modernity and the second, revealing the fissures and discontinuities between the promises and reality.